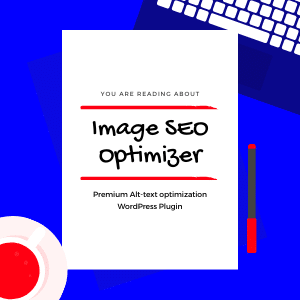 And it also updates your open graph meta tags. The Open Graph meta is responsible for those large images in Twitter cards and Facebook posts when your post is shared.

This plugin really intrigued me. Well, in this case, not because it’s something we’ve never seen before.

It is because of its tagline: Revolutionary Image SEO Optimizer.

Image SEO optimization isn’t limited to alt tags (or alt text), but they have more impact than you may think. Overall, images are often overlooked when we talk about on-page SEO.

In order to make the web a better place for every human irrespective of their physical limitations, small things like alt tags in an image are important.

But adding alt text to your images will consume significant time. You will need to manually enter the entire alt text if you’re not using an automation plugin like Image SEO Optimizer. Imagine adding alt tags to 50 images in a photography blog post.

It’s a cool plugin and does the job. And it looks modern too. Unlike another alternative which looks like they are still stuck in the past decade.

What’s really fascinating is the Image SEO optimizer is a premium plugin. And they charge by a tier system.

Adding alt tags to images automatically is old technology. There are tons of free plugins.

So what does Image SEO Optimizer does differently that it charges a premium?

Here are the key features of Image SEO Optimizer:

The plugin will automatically add alt tags to every image when it is uploaded to your website. When you upload an image, the Image SEO Optimizer will fill the alt text for you and add relevant keywords.

But unlike the other plugins, Image SEO Optimizer uses Artificial Intelligence to scan the image, and then depending on the content, it generates an alt tag.

Below is an example of Image SEO Optimizer using A.I. to scan and assign an alt tag to price and plans image:

The alt tag for this pricing and plans image generated was “Line – Organization.” And the title tag was exactly the name of the image file.

Now, this alt tag generates by Image SEO Optimizer’s A.I. isn’t quite wrong, though. It is, after all, an organized line, but it’s vague.

What do the other WordPress SEO plugins do to automatically install alt-tags?

Plugins like Image Optimization for SEO dynamically place the alt tag in the front-end of your website. It won’t affect your database, and the change is reversible. It allows you to use the name of the image as your alt tag.

On the other hand, Image SEO Optimizer literally “writes” the alt text for you. This change is pretty much irreversible, but other plugins can overwrite it.

They use API to scan your images, which means their app will read your image. They use facial recognition too. So if you upload a pic of my all-time favorite Neo from Matrix, the plugin would add the alt tag named Keanu Reeves or Neo or… Well, let’s test it!

As a way to separate itself from other plugins, Image SEO Optimizer has a Social Card feature.

Unlike other SEO and social media plugins, Image SEO Optimizer allows you to create preview cards for your posts.

It takes your featured image, combines it with your post title, author details, and turns it into something like this:

This is called a preview card.

To edit this social media preview card template, go to the “Settings” section of the Image SEO Optimizer plugin. Then click on “Social Card Optimizer.”

You can change the color of the background, text, and alignment of your social card. There’s also an option to add starts, quite useful for review articles.

There are many other customization options such as displaying the author, reading time, author avatar, etc.

Under the images section, you can change the logo and the default background image on the card.

Make sure to customize it, so it matches your brand.

Under the Alt Optimizer settings, you can select three things:

Come down to Alt Text settings. You can choose to optimize all images, even those that already have an alt tag. Or simply those images that have empty alt tags.

There are three Formats available for alt text generation and customization:

Which would generate the alt text using artificial intelligence to recognize what’s in the image and specify a keyword + keyword alt tag.

The title of your post will be used as an alt text combined with a keyword generated by the plugin.

This option will insert your blog’s title, such as BforBloggers (the title of this blog), with a keyword generated by the plugin.

The last option under the Alt Text Optimizer settings is the Custom Template. You can combine the above three shortcodes and create a custom alt text generation rule. Not recommended for beginners, though.

You can easily click on the Bulk Optimization button to generate alt tags for all the previous media uploaded on your WordPress website.

It is a premium plugin with a free trial. You can install the free plugin from the WordPress plugin repo or from their website.

Once you install and activate the Image SEO Optimizer, you will have to register for a free account to generate an API key. The free account will allow you to optimize 10 images.

After the registration is complete and you are done adding your API, the optimization will start happening automatically for the media you start uploading after activation.

In my test blog, it would take me 317 minutes to rewrite my images’ alt text and file names. And Image Optimizer can do it for me in under 45 minutes and 30 seconds.

Your dashboard will also show you the number of images optimized and left unoptimized on your website. Along with how many credits you have left. 1 credit is required to optimize 1 image.

You can purchase extra credit from the Image SEO Optimizer website. Or subscribe to a monthly, annual plan.

There are 5 plans to choose from: 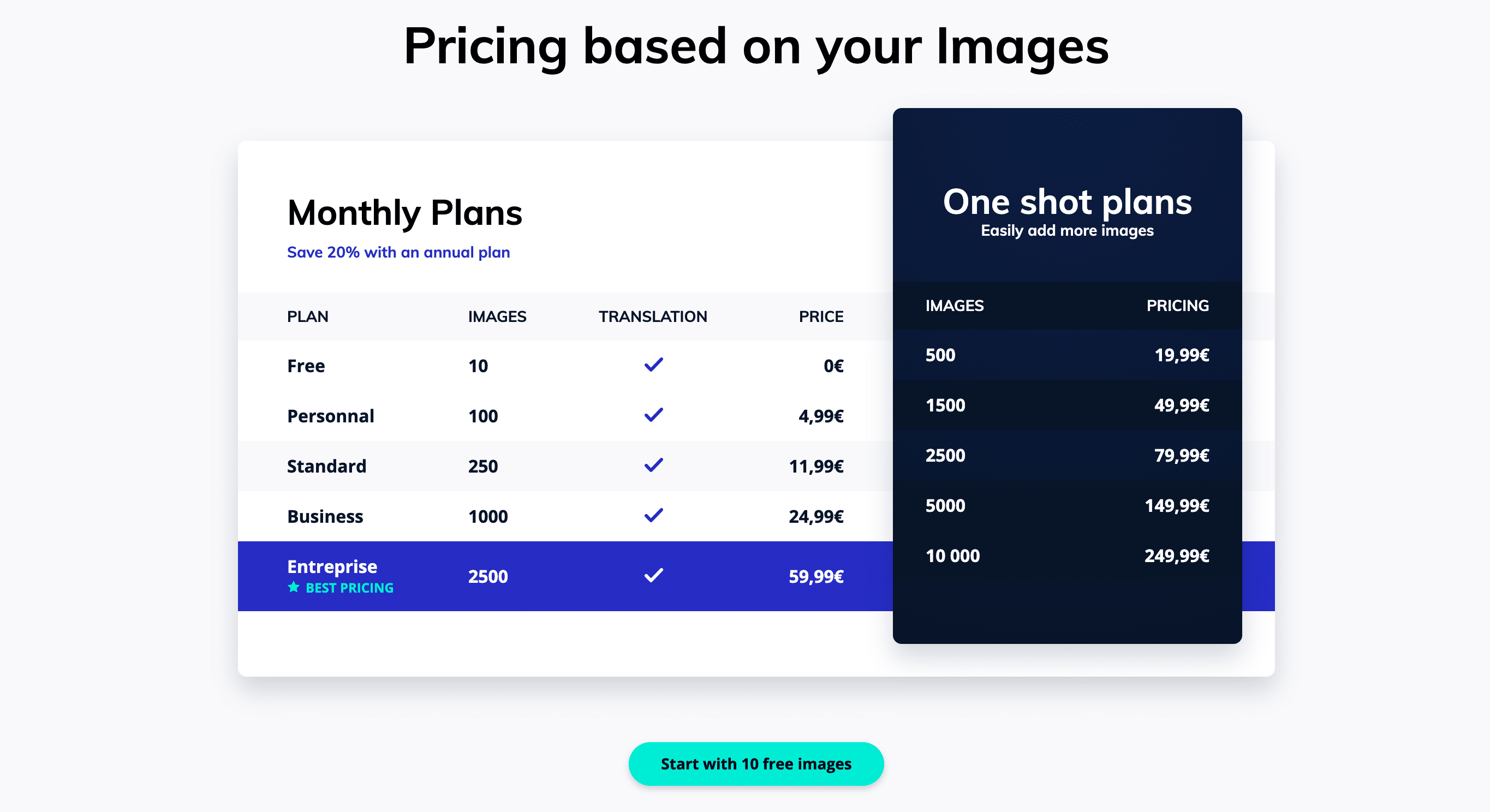 You can also choose from one-time-fee plans. These plans require a single payment for a limited number of credits.

I’d recommend purchasing the €19.99 one-time plan and testing the plugin for a while. If everything works out for you, I’d suggest purchasing 10,000 credits for €249.99. It makes much more sense.

However, there are multiple free alternatives available. None of the other plugins have the same feature, such as A.I. and Social Card, but they get the job of generating alt tags done.

WordPress plugin like Image Optimization for SEO is a great alternative.

Image SEO Optimizer is overall a great image SEO plugin. It has unique features and can save you a lot of time and extra hassle. Automated alt-text can literally save your hours in a week, depending on your work.

Take the free trial of the Image SEO Optimizer.

If you want to make your images even more SEO-friendly and get more traffic from Google, you should see our guide SEO strategies for Images. 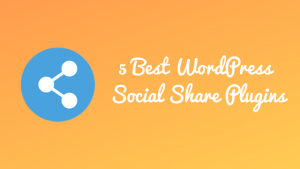